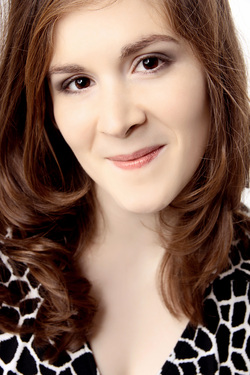 The American Coloratura Soprano Julia Katherine Walsh has garnered critical acclaim in Opera, Concert and Recital performances throughout Germany and the USA.  She is best known for her interpretations of the works of Wolfgang Amadeus Mozart, Richard Strauss and 20th Century American composers, and especially for her portrayals of The Queen of the Night, Konstanze, and Zerbinetta. Her incisive and believable characterization, combined with a brilliant and agile instrument, allow Julia to deliver performances which delight both audiences and critics alike.

On the Opera stage she has performed with the Freies Landestheater Bayern as The Queen of the Night in Mozart's Die Zauberflӧte in Munich and Stuttgart, as Sandmann and Taufee in Hӓnsel & Gretel (Freies Landestheater Bayern), Königin der Nacht, Pamina and Papagena in a children’s adaptation of Die Zauberflӧte (Junge Oper Detmold), Konstanze in Die Entführung aus dem Serail (Theater Lünen & Oper Schloss Laubach), Rosine in Der Barbier von Sevilla (Opernakademie Bad Orb), Dido in Dido and Aeneas (Center City Opera Theater), Papagena in The Magic Flute (Center City Opera Theater), Oscar in Un Ballo in Maschera (Center City Opera Theater), Just Jeanette in the New York Premiere of Too Many Sopranos (Hunter College), Diana in Orpheus in the Underworld (Bronx Opera Company), Ines in Les Bavards (Intermezzo), Najade in Ariadne auf Naxos (Intermezzo) and Barbarina in Le Nozze di Figaro (Brevard Music Center).  She has also covered the roles of Eliza Doolittle in My Fair Lady (Charlottesville Opera) and Adina in L'elisir d'amore (Center City Opera Theater). Julia has performed in opera scenes with Joan Dornemann's International Vocal Arts Institute where she sung Lucia in Lucia di Lammermoor, Gilda in Rigoletto, Zerbinetta in Ariadne auf Naxos, Königin der Nacht in Die Zauberflöte, Sophie in Der Rosenkavalier, Adina in L'Elisir d'Amore,  Madamoiselle Silberklang in Der Schauspieldirektor, and Adele in Die Fledermaus, as well as with the Lotte Lehmann Akademie where she sang Olympia in Les Contes d'Hoffmann, and also with the New York Lyric Opera Theater, where she sang Gilda in Rigoletto as an Artist-In-Residence.

On the Concert stage Julia performed in December 2017 in Bad Orb, Germany in a New Year's Gala Concert with Anke Eva Blumenthal and the Opernakademie Bad Orb where she sang arias from Lakme, Candide, Der Vogelhӓndler and Die Zauberflӧte, as well as Duets and Ensembles from Operetta classics like Die Fledermaus, Die Lustige Witwe and Wiener Blut. She performed in 2014 with the Johann-Strauss-Orchester Frankfurt singing arias from Die Fledermaus and Viennese Songs from Johann Strauss in three concerts in the Frankfurt Metropolitan Area. In 2008 Julia was a Soloist with the Hunter College Choir and Symphony in Haydn's Paukenmesse, and at Radio City Music Hall where she sang the National Anthem on behalf of Hunter College. In 2006 she was a Soloist with The Reading Choral Society and Reading Symphony Orchestra in Faure's Requiem and Mozart's Vesperae solennes de confessore.

As a Recitalist in 2020, Julia created a 3-part Virtual Concert series entitled Women in Music, which she performed with Dr. Tzu-Hwa Ho on Piano, in conjunction with the Community Music School of Lehigh Valley & Berks, and which is available to view on CMS's YouTube Channel. In 2017, Julia sang a Liederabend with her Duo-Partner and Pianist Clarin Isai Merk, and Simon Vater on Clarinet, at the Kinikum Rechts der Isar in Munich. That same year she also performed in June at The Seidlvilla once again with her Pianist, Clarin Merk, and at the Richard-Strauss-Festival in Garmisch-Partenkirchen in a Masterclass with Ks. Angelika Kirchschlager and Julian Riem. At the end of August she sang in a Masterclass with Thomas Quasthoff and Justus Zeyen at the Schubertiade in Schwarzenberg, Austria, and then in September she sung at a concert held by GEDOK e.V. at The Seidlvilla where she sang selected songs by the American Composer Gloria Coates. In 2016 she was honored to be invited for the first time to the Schubertiade in Hohenems, Austria, one of Europe's most prestigious Art Song Festivals, to sing in a Masterclass with Thomas Hampson and Wolfram Rieger. In February 2016 she performed with her Pianist, Clarin Merk, at the famous Asamkirche in the Ursuline Convent in Straubing, Germany and raised nearly 350 Euros to benefit two good causes: a local music school and the Convent's Foundation to help students in need. She and Ms. Merk also performed that year in May at The Seidlvilla in Munich, and in October at the Klinikum Rechts der Isar, as part of their Seelsorge Concert Series. In December she sang with Julia Chalfin and Sophie Raynaud in Ms. Chalfin's 'Opernstammtisch' at the Schlachthof in Munich, and a few weeks later, a Christmas Eve concert in Allentown, Pennsylvania at St. Timothy's Lutheran Church. In 2014 she was chosen as one of 5 participants in a Masterclass with famous Mezzo-Soprano Brigitte-Fassbaender at the Richard Strauss Festival in Garmisch-Partenkirchen, Germany, where she performed several of Strauss's Lieder and Zerbinetta's Aria from his Opera, Ariadne auf Naxos, to great acclaim. In 2013, Julia worked closely with Ingeborg Hallstein, another legendary singer, while she took part in a Masterclass that Hallstein gave on 'The Style of Operetta', at Schloss Henfenfeld. Julia sung the famous 'Schwips-Lied' in the final concert there and received thunderous applause.

Julia is very grateful to have received grants and scholarships from The Joyce Dutka Foundation for the Arts, The Berks County Community Foundation, Joan Dornemann's International Vocal Arts Institute, CareerBridges, The Reading Musical Foundation, The Reading Choral Society, The Lotte Lehmann Akademie, The Brevard Music Center, Westminster Choir College, The National Association of Teachers of Singing, Hunter College of The City University of New York, the American Association of University Women, the P.E.O. Women's Club, Musikschule Norbert Kalina, Timothy Montgomery, and the late Marianne DeMarco.  Julia is also a member of the National Association of Teachers of Singing (NATS) and the New Jersey Chapter of NATS, a performing member of the Professional Women Singers Association of New York City, the Franklin Woman's Club, an alumna member of the Munich International Women's Club, as well as a member of musica femina muenchen, a professional organization for women musicians and composers in Munich, Germany.

Resume: (in English and German)